Weird Beard’s Little Things That Kill is a session IPA, 3.8% ABV.  It has a sparkling pale gold colour and, for a beer with a low ABV, it is surprisingly fruity with an excellent flavour.

Black widow spiders; the common krait; deathstalker scorpions; box jellyfish: it is surprising just how many little things there are, which can kill, when you sit down and stop to think about it.

The blue-ringed octopus: not much more than 10cm long, they are one of the deadliest creatures to live in the world’s oceans.  Their venom can kill a human, and there is no known antidote.  Death follows respiratory failure, blindness and eventual paralysis.

Thankfully, fewer little things that kill, sat in a pub in central London, but that is not to underestimate the potential perils.

So Little Things That Kill gets a thumbs-up.  Plus, Gavin Rossdale: what’s not to like? 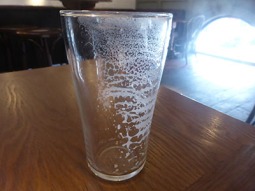 Beery Sue is still limping from the heels she wore at the weekend.