On the Trail of the Wee Noonts

It was some petroglyphs in Capitol Reef National Park, Utah, which put me on the trail of the Wee Noonts, but not before a bit of a hunt.

I had read a little about the petroglyphs beforehand.  They date from roughly between one and two thousand years ago, and they depict the Hisatsinom (The People of Long Ago) and the Wee Noonts (The People Who Lived the Old Ways) on their eternal migration to Tuuwanasavi (The Centre of the Universe).

The red sandstone landscape of Capitol Reef lends itself to artistic expression and proto-Banksy ancestors from the Hopi and Paiute Tribes carved their representations directly into the rock face.

A helpful signpost and a convenient boardwalk direct me towards where the petroglyphs can be viewed.  As though impatiently charging towards my own Tuuwanasavi I reach the end of the boardwalk; scanning the rock face in front of me, puzzled why I can’t see any petroglyphs.  There are no more helpful signposts; no big directional arrows saying “Look here”.

For the first time, I realise that I have no ideas as to the scale of the petroglyphs.  The photographs I have seen of them give no idea of size.  They might be mountain-size like the White Horse of Uffington, or they may be tiddly, like an artwork by Willard Wigan.  I scan the cliffs again, trying to accommodate the possibility of both of these extremes on the size-spectrum.  Still nothing.  I confess, I am disappointed.  It feels the same as it had on a childhood visit to the zoo, when I had travelled excited to see the penguins, only to arrive and discover that they had been relocated due to essential maintenance work to their enclosure.  These early set-backs leave their scars.

It is another visitor who directs me back along the boardwalk; I had been misguided believing that all good things come at the end.  The reality is that the petroglyphs intermittently line the entire extent of the boardwalk, although they still take a little bit of hunting out.

Gradually, though, my eyes become accustomed to recognising carvings of deer and porcupine amidst the broad canvasses of red rock; finally, chance upon a long row of figures, which I presume to be Hisatsinom and Wee Noonts. 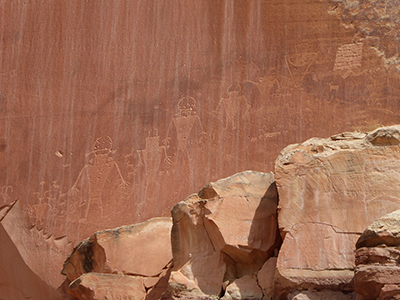 From their depictions of themselves, The People of Long Ago and The People Who Lived the Old Ways favoured shoulder pads to rival Krystle Carrington and Alexis Colby.  Like a Rubin’s Vase illusion, depending on how I look at them, sometimes the petroglyphs appear to me as small square-headed primitives sporting long-horned helmets, or as large-headed astronauts encased in bubble space helmets; simultaneous depictions of two ends of the same historical and evolutionary journey.

Wee Noonts in space?  Perhaps they really did discover their Tuuwanasavi.

E. C. Glendenny points out where to spot some petroglyphs.