Laxey: A Tale of Two Wheels

Who ever knew that Laxey had two wheels?

Mention the name Laxey in informed company and the chances are the response will be:

Laxey Wheel.  Singular.  One of.

Deliberately staying in Laxey––in the excellent Shore Hotel, since you’re asking––it was inevitable that I would visit the Wheel.  The Laxey Wheel is the largest water-powered wheel in the world.  It is famous, not just throughout the Isle of Man, but beyond.  Not so many months earlier, I had seen a TV show where Julia Bradbury had visited the Laxey Wheel.  And what’s good enough for Julia is good enough for me.

I set off from the harbour-side in Laxey in good spirits, followed the road up the hill to the main part of the village and, there directly in front of me, was a big wheel.  Now, if I am being entirely honest, it wasn’t quite as big a wheel as I was hoping to see but, nevertheless, as wheels went, it was a big one. 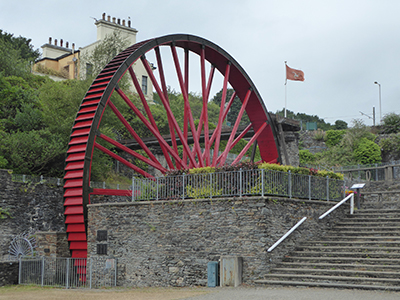 I was pleasantly surprised to find that there was no entrance fee to look at the Wheel; in fact, I was able to stroll right up to it and look around.  I was also surprised to discover myself the only visitor, but I justified this anomaly with the explanation that Laxey is, after all, a bit off the beaten track for most casual tourists and, big water wheels don’t necessarily float everyone’s boat.

I took some photographs from the bottom of the Wheel; took some photographs from a terrace overlooking it from above; took some arty snaps of drips of water falling off the paddles, however after about ten minutes I had exhausted most of the possibilities that the Wheel appeared to offer.  It had been rather a long journey to get to visit Laxey for ten minutes’ sightseeing.  In the back of my mind, I could picture Julia Bradbury standing on top of the Wheel, looking directly down on the rotating paddles.  I surveyed the Wheel again.  There didn’t seem to be any way to get on top of it.  Perhaps it had been a special privilege for Julia Bradbury?  But then when I look again, there doesn’t seem any possible way to get on top of the wheel, special privilege or no special privilege.  I wonder if I have just imagined the episode.  Perhaps Julia Bradbury never came to Laxey in the first place?

A plaque announces that the Wheel has an affectionate name: Lady Evelyn.  One last look, but there is nothing more for it.  I say goodbye to Lady Evelyn.  Visit over.

I confess to being a bit disappointed.  Don’t get me wrong, Lady Evelyn was a big wheel.  I guess, I was just expecting a bigger wheel.  And, while I am still wallowing in this disappointment, there she is…  Only half-glimpsed, some half a mile further on, rising above the treetops, is another big wheel.  A properly big wheel.

This one is called Lady Isabella.  If it is not too vulgar to reveal a lady’s vital statistics, she has a diameter of 21.75 metres and weighs over 50 tonnes.  The purpose of Lady Isabella was to pump water out of the neighbouring Great Laxey Mine, which was once a source of silver, lead and zinc. 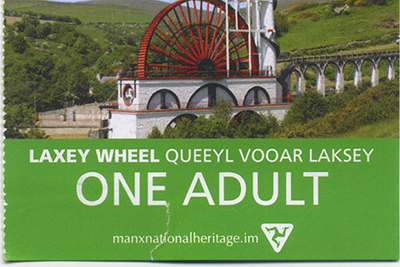 The view from the top of Lady Isabella is impressive, revealing the little ribbon of houses, which comprise Laxey village, in the valley; the green hills, which wind all the way to the summit of Snaefell; the electric railway; and the start of the Mines Trail, a woodland track, which can be followed––I did––to view the semi-derelict buildings of the original mine.

A visit to Lady Isabella is thoroughly worthwhile.  The site is an interesting glimpse of a lost industrial heritage; the woodland trail provides a pleasant countryside stroll on a warm day; and, nothing against Lady Evelyn, but when it comes to wheels: size matters.

Check out some more of E. C. Glendenny’s travel writing on Amazon.