The Jesuit reference is not without relevance: descendants of Jesuits feature in the Biggles short story The Adventure of the Horticultural Hermits, published in the collection Biggles – Charter Pilot by Oxford University Press in 1943.

I can vividly recall the first time that I read Biggles – Charter Pilot.  I would have been twelve years old; a rather racy, new-look Armada paperback had just been issued; the OUP first edition remained/s a rarity, and one only recently acquired. 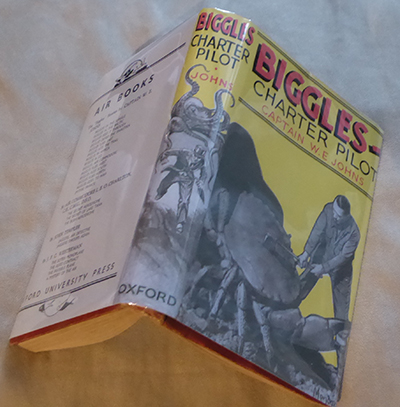 Dr Augustus Duck is introduced as a biologist, who is interested in investigating reports of unusual phenomena––a pursuit with which I am much in sympathy––and, in Biggles – Charter Pilot, our eponymous hero and his companions find themselves flung into wild escapades in which they encounter, amongst other creatures, prehistoric pterodactyls, dodos and a giant woolly mammoth.

Dinosaurs and Biggles.  My two passions colliding head-on.  It should have been a marriage made in heaven.  It was not.  My twelve-year old self was outraged.

Now, this had not been the first time that Biggles had ventured into the realms of fantasy: Biggles Hits the Trail, first published in 1935, and which I had greatly enjoyed, features a mysterious death ray, carnivorous centipedes, and a magic mountain that glowed blue.  Reading Biggles Hits the Trail I was prepared to suspend disbelief and just enjoy the story.  Biggles – Charter Pilot was different.  It ventured too closely into personal territory; it danced too liberally on the boundary between make-believe and science.

Admittedly, in most cases, Captain W. E. Johns offered up a rational, scientific explanation for the strange phenomena, which Biggles and crew encounter during their dalliances with Dr Duck, but there were sufficient loose ends to leave a critical twelve-year old incensed.  It felt like Johns had taken my two passions and was being disrespectful to them both.

It has taken me a long time to return to Biggles – Charter Pilot.  Those early impressions are not ones, which can be easily dismissed.  However, in a spirit of entente cordiale, I have gone back to the book.  As an adult, I can read the stories with a different mind-set.  Now I can appreciate and enjoy the stories by picturing them as somehow separate from the wider Biggles canon.  Nevertheless, the book remains an anomaly.

To better understand the book, it is perhaps necessary to place it in the context of its time.  The first story––The Adventure of the Enchanted Island––in which Biggles encounters a giant crab on an unexplored island, was first published in October 1941 in the Boy’s Own Paper.  At that time, Britain had been embroiled in the Second World War for two full years, and things were not looking particularly rosy.  On the Eastern Front, Operation Barbarossa had commenced and German troops were pushing into Russia; despite the Blitz being over, bombs were still regularly falling on London; the Japanese attack on Pearl Harbor was still two months in the future, meaning that in many theatres of war Britain was standing alone, the Americans yet to enter the conflict; it was a period of great uncertainty when it would have been hard to be optimistic about the future of Europe.  Even Biggles, who, up until that point, had chiefly only ever known victory in his encounters against a German foe, would have been hard-pressed to find any crumbs of comfort listening to news emanating from the Front.  In that climate, a retreat into escapism must have been a preferable alternative to reflecting the grim reality of the times.

Rationally, I can read Biggles – Charter Pilot in this context but, emotionally, my twelve-year old self will not be so easily silenced.  How can I assimilate Biggles – Charter Pilot into the Biggles world order?  If it were an episode of a soap opera, Biggles – Charter Pilot could be explained away as nothing more than a fantastic dream.  But that won’t do.  It would be nice to think that Ginger was simply spinning some tall tales to entertain his fellow pilots but, if there is one quality that marks out Ginger, it is straight-forward, guileless honesty.  No good looking for explanations down that route.  So, how am I left?

For me, Biggles – Charter Pilot will remain an eternally ugly duckling.  And, no doubt if Dr Augustus Duck is investigating the problem, it will be a giant ugly duckling at that.

Bradley Dunbar teeters on the edge of the crevasse of childhood memories.