The thing that continually struck me while travelling around China was the sense of scale.  Everything was so enormous; whether it was the vast expressway leaving Beijing Capital International Airport or the ambition of the engineer behind the construction of the new apartment buildings, which stretched in uniform rank for unending blocks in the city suburbs.  I felt like a Lilliputian adrift in a world of Gullivers.  My sense of awe was constant and palpable.

One day, in the south of the country, the bus I was travelling on broke down on the road between Longsheng and Yangshuo.  Thankfully, it was able to limp along until it reached a service station from where the driver could call assistance, but what a service station!  It must have covered a football stadium-sized block, with a forecourt big enough to cater for oil tankers.  I felt no sense of resentment at a three-hour delay, only a sense of wonder of being in the presence of giants.

This awareness of scale was perhaps most keenly experienced at Chengdu East Railway Station.  Rather than a railway station, it had the appearance of a major, international airport.  Approached from either the East Square or the West Square, Chengdu East Railway Station stretches over five floors, has 14 platforms, 26 tracks, and is a major transport hub for the whole of Southwest China.  I was there preparing to catch an overnight train to Sanjiang in Guangxi Province, a journey of something over 1000 kms.

So cavernous was the station that it felt strangely empty of people, but this was an illusion.  Like a vast human ant-hill, there was movement everywhere.

I checked my departure platform; had almost an hour to spare before my train was due to depart.

Untypically, but perhaps drawn to a recognisable image in an otherwise unfamiliar world, Colonel Sanders smiling beardy face provided an irresistible pull.  I ordered a small portion of wings to take away, keenly anticipating the long-established flavour of 11 herbs and spices.  I had read that Chengdu was famous for its hot Sichuan cuisine, but nothing I had eaten during my entire stay in the province had been as spicy as those chicken wings.

My lips and tongue burning, tears rolling down my cheeks, I sought a quiet sanctuary to recover my powers of sentient thought, whilst my mouth recovered from the unexpected mauling.  At the furthermost end of the departure floor, a long glass bannister was unoccupied and commanded a wide view of the station entrance and the city beyond.  Gazing over the abyss, I experienced a similar sense of wonder as when standing overlooking the Grand Canyon, but here the pervading environment was of glass plate and grey concrete rather than red sandstone.  It was none the less magnificent for that. 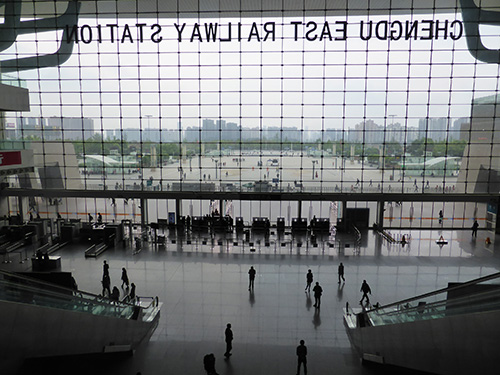 Uniform regiments of tower-blocks encircled a wide monochrome horizon, while neatly-clipped green shrubs, manicured to Party haircut regulation accented the perimeter of the Station Square.  Beneath me, travelling humanity scurried, endlessly, rendered insignificant microbes against such a vast urban backdrop.

I was babyishly amused to see a sign––in Chinese and in English––on the edge of the glass balustrade.  It warned: “No Tossing”.  It is a word that only has a double meaning for an English person; both Australian and American friends have stared at me with blank incomprehension on the––occasional––times I have used it in polite company.  Nevertheless, it raised a private smile for me.

I looked at the sign more closely and wondered whether the command was meant to apply to all objects, or just a hammer, a pair of pliers, and a button mushroom?

Due to travel restrictions during the Coronavirus Pandemic, E. C. Glendenny is currently unable to travel and is only making excursions in her memory.  If you would like to travel with her, a new volume of E. C. Glendenny’s travel writing, Easy on the Eyes, has just been published, available as a paperback on Amazon.