After over 150 years vacant, Trafalgar Square’s so-called Fourth Plinth, has been welcoming contemporary works of art to grace the top of its stone pedestal since 1999.

Artists whose work have been displayed on the Fourth Plinth include Mark Wallinger, Rachel Whiteread and Anthony Gormley.  The current sculpture is Really Good by David Shrigley, a 7-metre tall bronze hand with a massively elongated thumb extending skywards. 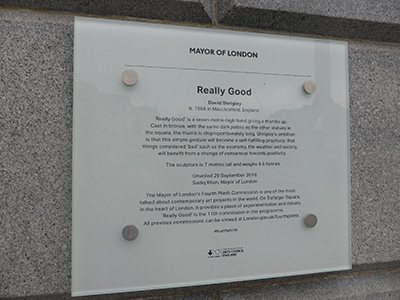 The implication of the thumbs-up imagery of Really Good is a positive affirmation that all is well.  But should it be left to the artist to make this call?

For over a decade, observers of the Fourth Plinth merry-go-round have believed not.  They have taken it into their own hands to decide whether the art displayed is ‘really good’, or ‘really not’.  The method of displaying this appraisal is perfectly simple.

The complete circumnavigation is made somewhat tricky by the presence of the stone staircase next to the plinth, which connects the Fountains level of the Square with the Gallery level.  Novice Circumnavigators overcome this problem by performing a simple “pass-by” in front of the plinth in the direction of their choice; more seasoned critics perform the entire loop, which involves going up (or down) the stairs, walking along the promenade parallel to the front of the National Gallery and then down (or up) the steps next to the equestrian statue of King George IV, and so back around again.

Some works of art on the Fourth Plinth, which have divided public opinion have resulted in significant logjams around the base of the plinth, the Clockwisers coming face-to-face with the Widdershiners in a confrontational stand-off.  However, when there is a situation of general artistic concord, it is wonderful site to witness the Circumnavigators harmoniously circling in perfect unity.

David Shrigley may be attempting to subtly canvas public opinion in his favour with his optimistically titled work, but Fourth Plinth Circumnavigators are not so easily influenced.  They know their own minds.  They know art.  And they know what they like. 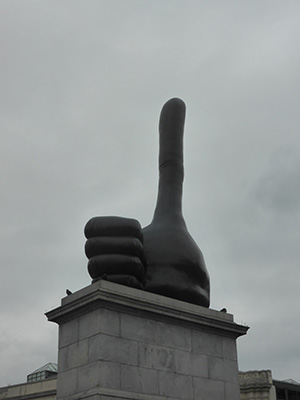