Going Up or Coming Down?

I contest that I have quite a good head for heights.  In my time, I have––quite deliberately––stood at the edge of any number of tall buildings or high precipices, simply to enjoy the exhilaration of obtaining the ‘best view’.

I have walked on the glass floor at the edge of the 107th floor of the South Tower of the original World Trade Center; I have gone to the top of both the Eiffel and the Tokyo Towers; I have taken cable cars on Sugar Loaf and trains to Jungfraujoch; and stared out from the unprotected summit of the Leaning Tower of Pisa.  Not once did I feel any sense of trepidation regarding my relative height above sea level.  Never ever in fact.  Except that one time that is.  On Lundy.

Lundy is a small island in the Bristol Channel.  It rises relatively sheer from the surrounding sea––sheer enough to make the number of safe points of anchorage limited––but the cliffs are in no way as high as, say, the Cliffs of Moher, and I have had no issue gazing down from the summit of them.  No, Lundy’s cliffs were not the problem.

I was staying in Old Light Cottage, a small, single-storey, stone building, located in a grassy, walled paddock, directly beneath the Old Lighthouse.  The lighthouse itself is no longer used for its original purpose––more modern facilities to both the north and the south of the island having made it redundant––but it is still open to the public and possible to scale; a conveniently-placed stripy wooden deck-chair in the uppermost gallery providing a comfortable vantage point from which to sit and view the small island in its entirety. 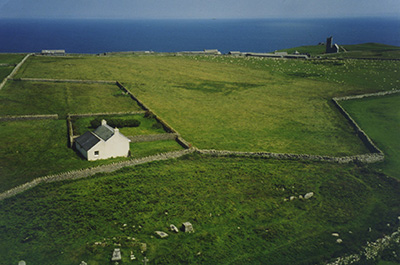 I had thought little of the narrow, stone spiral staircase on the way up.  However, on the way down, it successfully managed to transform itself inside my mind, into a direct route to Dante’s Inferno.  My head was spinning; I began to lose all sense of which way was up and which way was down; my imagination distorting the borders between reality and unreality.  I tried to hug the circular stone wall.  I sat down on my bottom, bumping my way slowly earthwards––or so I believed––one small step at a time, always conscious of the gaping central void of the lighthouse, which continually seemed to be impelling me to leap into its hard and unsympathetic embrace, and so put an end to this prolonged anguish.

I got down in the end.  Neither logic nor memory quite know how.