The Pleasure of a View Postponed

It was perhaps one photograph more than anything else, which took me to Norway, and the Lofoten Islands specifically.  And that was the view of the small town of Reine from the summit of Reinebringen.

I wanted to stand in the same place that the photo had been taken from; admire the view, looking down on the network of interconnected little islands; see the magnificent rock walls of the Lofoten massif stretching out like the fingers on a giant hand, placed palm-down on the watery inlets of Reinefjord.  It was a view worth travelling 1250 miles and scaling a 448-metre peak to enjoy.

Except… when I arrived in Reine, the route up to Reinebringen was closed.  Or, if not actually closed, positively discouraged.

It transpired that, in recent years, too many of my fellow travellers, all no doubt inspired by the same photograph that I had seen, had tramped the same path up the mountain, leaving the route dangerously unstable and the environment perilously eroded.  As a consequence, a new, more permanent, path is being constructed but, with funds limited, it seems quite likely that this project will not be completed for several years.  In the meantime, climbers are asked to steer clear of Reinebringen, so as not to subject the old footpath to further deterioration.

Of course, the request is widely ignored––I saw several groups of hikers turn off onto the route; some more already higher up the mountainside––but not by me.

The new Reinebringen path seems a very worthy project to support and, if it means I must forgo seeing the wonderful view, so be it.  Hopefully, it will only be a pleasure delayed. 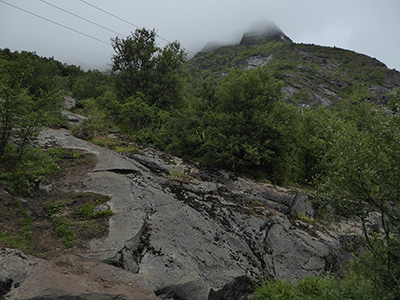 So, I will not post an image of the beautiful, iconic view from the top of Reinebringen, which first inspired me to visit Reine but, instead, a view from the bottom of the mountainside, which might make others think twice before venturing up before the new path is completed.

Travel writer E. C. Glendenny takes her views wherever they might materialise.