The sun was lifeblood to Bournemouth.  A seaside town, it thrived on its influx of summer visitors.  And one particularly notable visitor during the hot summer of 1949 was the children’s author Enid Blyton.

Enid Blyton had come to Bournemouth to attend a signing session at the famous Beales department store.  Beales is now a chain of stores, but its original shop was opened by John Elmes Beale in 1881 in Bournemouth, and the company’s headquarters and flagship store still remain in the town.

However, in 1949 Beales was a very different store to the current one.  The original Beales building was destroyed in the devastating Luftwaffe bombing raid on Bournemouth on 23 May 1943.  Before the store was fully rebuilt in the 1950s, it established a temporary site at 163 Old Christchurch Road, Bournemouth – now the site of Revolution Vodka Bar –  and it was to this site that Enid Blyton visited.

The public turnout was exceptional; the author’s popularity was riding high, particularly her Famous Five series, the first volume of which – Five on a Treasure Island – had been published in 1942.  By the summer of 1949, Enid Blyton had written a further six Famous Five stories, the most recent being Five Go Off to Camp (nb: Five Get into Trouble was published in October 1949).

Amongst the crowd, patiently queueing to speak to the author was Mrs X.  The queue was such that not only did it fill the ground floor of the store, but it also snaked around outside and onto the pavement of Old Christchurch Road.  For the people queueing outside, the sun beat down mercilessly, but there was a buzz of anticipation in the air; a noisy chatter of excited voices.

Mrs X was not actually looking to purchase a copy of Enid Blyton’s latest book – six shillings was a lot of money to find for a new book.  Instead, she had brought along a copy of a Famous Five novel that she already owned – Five Go to Smuggler’s Top – hoping that Enid Blyton would sign one of her bookplates and stick it in this book for her. 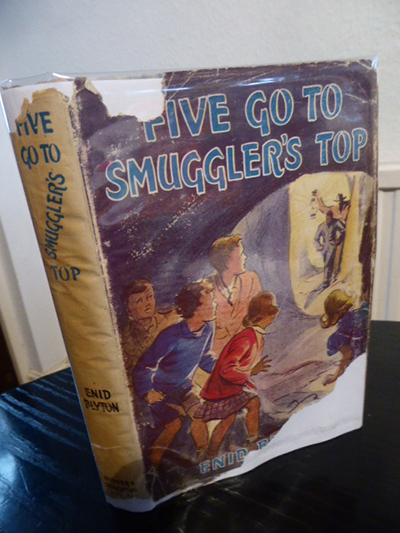 The queue was moving slowly.  Customers were not just wanting a signature from their favourite author, many were stopping to chat, some holding lengthy conversations.  Everyone knew that Enid Blyton’s time was limited.  Some of the good-natured banter in the hot queue began to turn to frustration.

A queue is an organic entity and, as with all organic entities, it has a natural life expectancy.  Under the heat of the summer day, this queue had reached its limits; it was destined to wither and die.

Enid Blyton had to leave.  Mrs X did not get to meet her.  Her copy of Five Go to Smuggler’s Top remained unsigned.  Until… 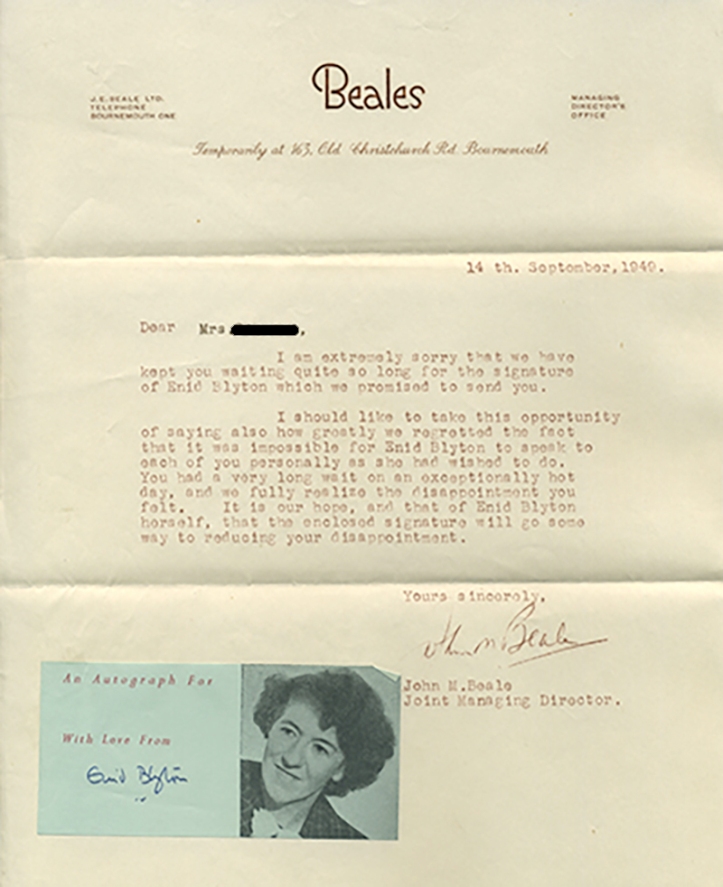 Several weeks later and the worst heat of summer gradually fading into a distant memory, Mrs X received a letter.  It was from John M. Beale, joint managing director of the famous store.  It was an apology for the fact that Enid Blyton had been unable to meet all the fans who had queued wanting to see her but, it included, by way of recompense, one of the author’s hand-signed bookplates.

An autograph for Mrs X with love from Enid Blyton. 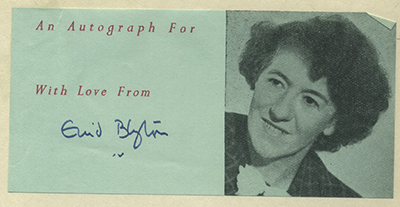 Fergus Longfellow craves the reader’s indulgence for this spot of fictional reconstruction based on a genuine letter he found tucked away in a copy of the first edition of Five Go to Smuggler’s Top.