The Iconisation of the Red Telephone Box

In a street, adjacent to the British Museum, three middle-aged Italian couples take it in turns to pose beside a red telephone box, whilst one of their companions take their photo.  It is a familiar London sight; so familiar that it passes practically unnoticed and unquestioned on the busy streets.  But it is surely odd behaviour, isn’t it? 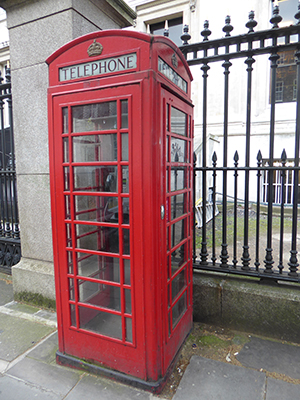 The red telephone box is a utilitarian object of street furniture.  Aesthetically, it is not particularly notable, even if it has a design provenance traceable back to Sir Giles Gilbert Scott.  And, with the ubiquity of mobile phones, fewer and fewer are even fulfilling the function of their original role: decommissioned phone boxes have been converted into mini pop-up restaurants; electric charging stations; community libraries; even public art galleries.

My Italians had chosen a working model beside which to pose, but did that simple fact really signal it out as a holiday-moment worthy of photographic record?  Examine the evidence.  Their holiday snaps would reveal smiling faces, deliberately framed against a backdrop of graffiti-bedecked red paint.  Look closer, and the interior of the box reveals numerous discarded fag ends on the floor; several prostitute cards on the walls; and, a suspiciously dark stain, suggesting that it has been recently used as a public urinal.

So why the appeal?  Why the necessity to document this moment for posterity?

Of course, the red telephone box is a British icon.  It is a form of tourist shorthand, which provides instant veracity to any visitor’s GPS credentials.  A traveller’s meme; a successful tick in the holiday-maker’s spotter’s guide.  The inherent paucity of the backdrop little matters; the iconography is what is king.

A similar shorthand operates in all countries: yellow taxi cabs in New York; long baguettes in France; circular bratwurst in Germany; wooden clogs in the Netherlands.  Viewed entirely objectively, none of these cultural icons are worthy of special note but, combined with the powerful appeal of place, they scream a simple message: “Look at me.  I am here”.

There is a danger here, though.  Approach a country with a checklist of stereotypes, and it is easy only to see a country as the way that you expect it to be, and not to see it for the way that it actually is.