Breathtaking as some of the more famous walking trails are in Utah’s many National Parks, it is rare that you find yourself in that position of being perfectly alone.  And that is what a lot of the enjoyment of a true wilderness walk is all about, convincing yourself, if only for a short period of time, that you are the last human being left on the face of the planet.  The Fisher Towers Trail allowed me that brief indulgence.

The Fisher Towers Trail is not in any of the officially designed National Park areas.  It lies about twenty-five miles northeast of the town of Moab, with the trailhead starting––and finishing––from a small car parking area and picnic ground off State Route 128.  The trail runs for 2.2 miles to a scenic overlook, from where it is then necessary to retrace your steps to return to the carpark.  For a comfortable roundtrip, with plenty of stops for “Wow”s and photos, it is worth allowing about three hours.

This is sandstone country.  And, in some areas, the red rock has been eroded into spectacular columns, long plateaus, and strange shapes.

Although elements of the trail have been constructed and for the most part the course is fairly clear, the trail is not altogether obvious where it traverses some wider slickrock ledges and, at one point, I found myself walking along a dried-up river bed, until I realised that I had taken a wrong turn.  However, stick fairly close to the base of the tall buttresses of the rock formations themselves––The Titan; Cottontail; Ancient Art; Kingfisher; and Echo––and you can’t go far wrong.

I have arrived at the trail deliberately early in the day; the few campers in the picnic area are barely stirring and with a bit of luck I have given myself at least an hour’s headstart over any fellow hikers.  As well as hoping to secure for myself a spot of seclusion by my early start, there is also a second reason for having got out of bed with the lark––or in this part of the world, the Steller’s jay.  The temperature.  Despite, still only being spring, afternoon temperatures can make it uncomfortably hot for hiking later in the day.  Knowing this, I always make sure that I am well prepared: even on a relatively short trail, such as this one, I carry plenty of water.

A noticeboard at the start of the trail informs me that the elevation gain along the route is a fairly modest 670 feet.  Even without gaining any extra height, the distant views across the valley of the Colorado River are spectacular.  Pretty, white flowers spring from seeming barren soil at various points beside the path; while white, twisted tree trunks reveal the true brutality of long exposure to a relentless sun.

A shallow crevasse across the path could have persuaded me to decide that this was the point to turn about, but a six-step steel ladder bridges the gap.  The trail-end is not too much further ahead. 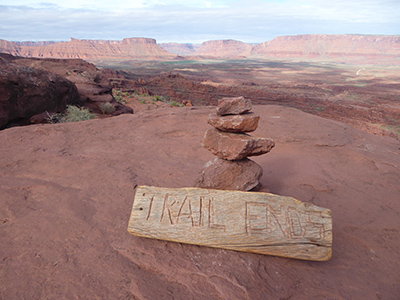 A rocky outcrop and a wooden sign propped up against a small cairn of stones denotes the true end of the path.  I look across a wide landscape, empty of any signs of human existence.  It is a prehistoric scene: vast, flat topped plateaus of sandstone spread out beneath a limitless sky of blue; the green valley of the Colorado River the only hint of life in a panorama dominated by the red rocky earth.

I am struck by the silence.  There is not a sound.  I stand watching, quiet and motionless, trying not to break the powerful spell of this moment, knowing that it will be my patience that will crack long before this landscape will ever alter.