This week sees the publication of the book Bullshit Jobs: a Theory by David Graeber.  In the book, Graeber notes that the majority of jobs in the developed world are ones that don’t appear to add anything to society.

It is a phenomenon, which was first identified by Ozzie Andros in his 2011 seminal work Ozmodium Management.

“Most people employed in the modern capitalist world do not do proper jobs.  The fact that you are reading these words suggests that it is more than likely that you are not doing a proper job.  Let me define what I mean by a proper job.  I am not suggesting that you are not performing the job for which you are employed to a perfectly satisfactory standard: no, it is more fundamental than that.  Simply, the job you do is pointless and utterly without any worth.  Basically, you are a parasite upon the labours of the people who do do proper jobs.  So, let me define those jobs, which are deemed proper: fisherman, farmer, builder, nurse, plumber, footballer, etc.; there are more, but you are not doing one of them.”  (From the chapter Proper Jobs, Ozmodium Management, 2011) 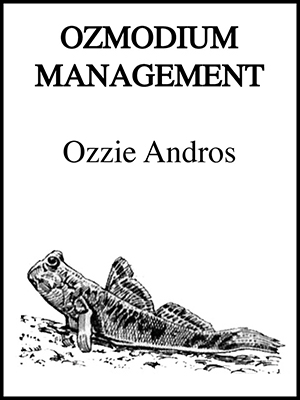 Whereas Graeber focuses on jobs which he describes as bullshit, Andros’ approach is to first identify ‘proper jobs’, those being ones that are primary commodity-generators.  He then defines ‘parasitic jobs’—basically everything else––as ones that feed off them.

I work in one of Andros’ ‘parasitic jobs’.  I am not alone.  Almost every office worker is similarly defined.  Do I baulk at Andros’ description?  Not a bit of it.  I entirely agree with it.  In fact, I actively embrace it.

After all, what else am I going to do?  Not everyone can be a farmer; not everyone can be a fisherman.  In the family tree of jobs, I am the farmer/fisherman’s fourth cousin three times removed; I am the distant relative who, when the will is read and the probate is granted, finds himself unexpectedly awarded a division of the spoils.

And, because of the crazy way that our society is organised, and the artificial financial worth that we allocate to one kind of work over another kind, I find myself with a disproportionately high share of the inheritance, rather than the meagre crumbs, which should be my true due.

Simon Turner-Tree kneels before the wisdom of the economics guru Ozzie Andros.