Waiting for the 12th of Never

At the bar, waiting while my beer is being poured.

The barman pulls down a pump on the far wall.  I can see the fluid slowly begin to fill the glass.  It is a very pale yellow colour.  Very pale; very yellow.  I wonder if perhaps I have made the wrong choice?  I don’t have a great deal of trust in pale yellow.  No real reason.  Although it may put me in mind of cheap lagers from the 1970s, which had more fizz than they did taste.  I can see bubbles.  Lots of bubbles.  I am beginning to get worried; wonder whether I should call out; say that I have changed my mind; that I would prefer a different beer.  The barman presents an unapproachable back as he continues to pour.  I remain silent.  Pensive.

It is a new beer for me.  The 12th of Never, from the Lagunitas Brewing Company.  I have drunk Lagunitas beers in the past.  Just never this particular one.  I have always enjoyed Lagunitas IPA.  I decide to hold the faith.  The beer keeps pouring.

The 12th of Never?  It’s not a phrase that is heard that often anymore.  Anymore?  Was it ever heard that often?  Perhaps when Johnny Mathis gave it a mid-1950s boost, but not much either before or since.

The 12th of Never: it is a phrase suggestive of waiting.  Waiting for a future event, which will never actually occur.  I am still waiting at the bar; waiting for my drink: it is hard not to draw parallels.

I think that it is a phrase, which divides people.  It is like another good drinking metaphor: the glass half full.  It separates the optimists from the pessimists.

Waiting for my beer to arrive, I realise that I am waiting with optimism.  My early anxieties have vanished; I am simply looking forward to a good pint. 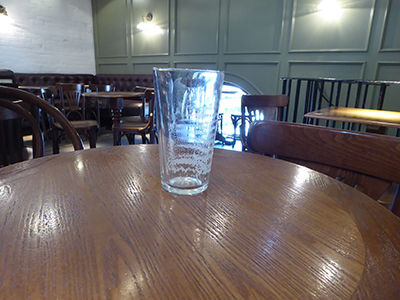 And it is a good pint.  The barman turns around from the wall-pump and presents my beer to me; I do not have to wait until the 12th of Never for my 12th of Never.  It has a sparkling citrus flavour; a good, persistent head; a strong, distinctive character, which I have come to expect from Lagunitas beers.  Refreshing.  Still very yellow, though.  Looking at it, I could almost think that it was a pint of Heineken!

Beery Sue discovers that good things come to those who wait.