“Tour of the Gasworks Museum anyone?”

It is not the kind of proposition likely to provoke an immediate spark of enthusiasm.  In fact, it sounds suspiciously reminiscent of the sort of worthy daytrip my dad would suggest in a desperate bid to get me out of the house during the long summer holidays when I was a child.

So, if I am being honest, it is with low expectations that I arrive at the shop-front-like entrance of Flame – the Gasworks Museum of Ireland in Carrickfergus. 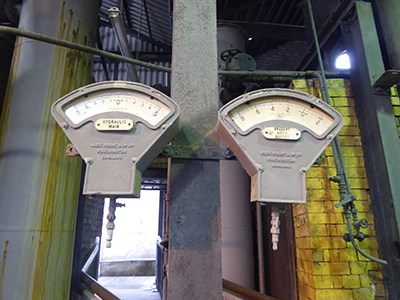 Inside, I am greeted by a distinguishly-bearded gentleman who greets me with the question:

“Was it you who telephoned?”

My spontaneity is accepted in good part, and I am ushered into a small side-room to watch a short introductory video about gas production – coal-fired, I should perhaps clarify; not bodily-produced.  It should be the kind of Discovery Channel content which, if I had been at home, I would have flicked over with my remote without either pause, comment or guilt but, instead, I find myself hooked.  It is only the beginning of what is to develop into a strange and powerful romance.  Of Flame – the Gasworks Museum of Ireland, I quickly find myself entranced.  Enthralled.

At the conclusion of the film, my bearded guide gently quizzes me about what I have seen.  I fail the verbal examination pitifully, but I am still permitted to continue the tour.

We enter the retort houses – the big room where the coal would once have been burnt to produce gas.  Don’t ask me for any technical details – I am approaching the entire process from an aesthetic, rather than a mechanical standpoint.  However, I find it fascinating.  I am invited to pick up one of the long coal shovels; it is heavier than my aesthete arms can bear. 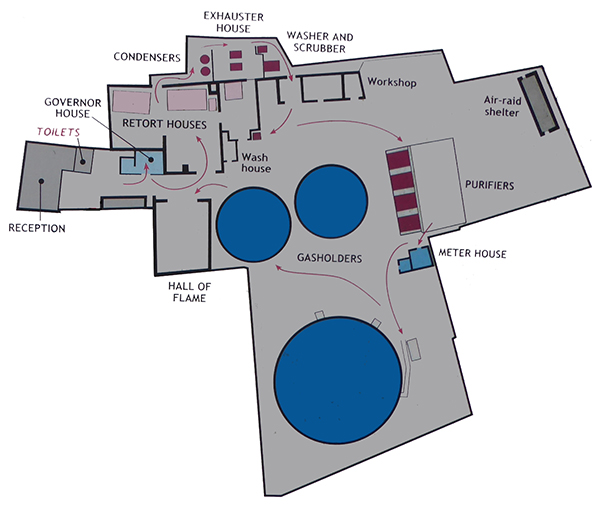 We follow the course of the production through a variety of rooms – condensers; exhauster house; washing and scrubbing – containing magnificent old equipment from a bygone age.  In a basement room, a heavy old metal door is opened to reveal a small, dark, coal-blackened chamber:

“All the children love to climb in there,” says my guide.

All the children and me.  I squeeze myself into the confined space without another word of bidding.

Outside, we climb a tall, metal staircase to reach the roof of the one remaining gas holder.  Me, standing on top of a gas holder, who’d have thought it?  From the top, there are expansive views across Carrickfergus. 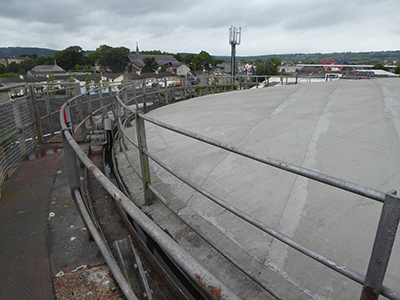 Back on the ground, and a second visitor appears.  This turns out to be the person who had “telephoned”.  I feel slightly put out that my tour is no longer an exclusive event.  However, my guide remains unswervingly well-informed and enthusiastic and, a subject of which I had no knowledge a short time earlier I now find myself becoming engrossed.

Once a major, thriving industry, around the world there are now only six existing gasworks: the one in Carrickfergus; one in Fakenham, Norfolk; one in Biggar, South Lanarkshire; one in Dunedin, New Zealand; and two in continental Europe, in Athens and in Warsaw.

The Carrickfergus works was opened in 1855, and it supplied gas until its closure in 1987 when the advent of natural gas spelled the end for most coal-fired gasworks. 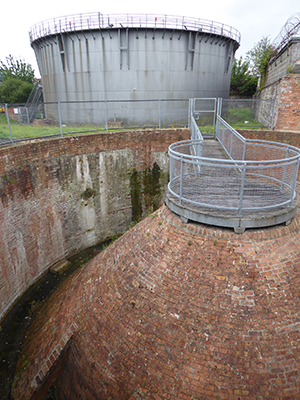 The tour ends in a large room devoted to all kinds of domestic gas-fuelled equipment, including a range of cookers through the decades; heaters; even a gas-powered radio.

The power of Flame – the Gasworks Museum of Ireland lies in its raw authenticity.  It is a genuine glimpse into an industry, which no longer exists.  There are no interactive displays; no boards of interminable information to read; no audio tour headphones, and it is much the better for that.

The fact that the site still exists today is thanks to the Carrickfergus Gasworks Preservation Society.  The enterprise is run entirely by volunteers, and it needs a boost of new recruits to survive into the future.

If you are in Northern Ireland, go along and pay it a visit.  It would be a great pity to see this Flame blow out.