Good Things Come to Those Who Wait

At times, it was hard to tell where the Guinness Storehouse attraction began and where the rest of Dublin ended.

Walking to the Guinness Storehouse at St James’s Gate from the centre of town is a good half hour’s schlep.  However, it is a pleasant walk along a more picturesque stretch of the Liffey than that afforded from the Ha’penny Bridge, and an excursion into the west of the city, with which I am not so familiar.  There is a nice view of St Patrick’s Tower, and a succession of Guinness icons, which reinforce how entwined is the old company with the modern city: a traditional delivery truck on its rounds; Tom Kennedy’s corner-street pub; a Toucan advertising sign from yesteryear.  It would be nice to stop and have a swift half, but I resist the temptation.  I am conscious that the clock is ticking.  Tick follows tock follows tick follows tock.

The streets surrounding the Guinness Storehouse are imposing in their scale and order; uniform and regular, you feel as though you are already inside a vast warehouse, patrolling the aisles of ranked shelving, stretching, monumental, to the open sky above.  It is a curious experience.  Like the Pompidou Centre in Paris, it as though the world has been turned inside out.  And these are my impressions before I have even started on a drop of the ‘black stuff’.  Perhaps the notorious Dublin ‘poetic’ has beset me?

I knew that I was going to enjoy the Guinness Storehouse from the get-go.  There is an inherent authenticity about the place, which seeps into every corner of the building.  The site of the current visitor attraction, was originally constructed in 1902 to house the fermentation plant for the Guinness factory.  Signs of the old works are everywhere.  The modern visitor’s centre is apparently constructed around a new seven-storey glass atrium shaped in the form of a pint of Guinness.  This––pretty major––design feature was entirely lost on me, as I snapped away photographs of old, original, dust-covered pipework and tucked-away crumbling walls.

I loved seeing all the old cogs and vats and dials and bits of rusting technology from a different generation.  All the lovingly-constructed new exhibits and modern paraphernalia were frankly incidental to the original architectural features, the vaulted brickwork and the ancient machinery of the old factory.  I would have been quite content to have been set loose as an urban explorer in one of the original warehouses; would have happily nosed around it, devoid of any additional tourist trappings.

I worked my way higher through the building, ever observant of the fascinating backdrop behind the exhibits rather than the exhibits themselves.  For me, the frame is often more interesting than the picture.  And, despite passing the Connoisseur Bar, the Brewers’ Dining Hall, Arthur’s Bar and the 1837 Bar and Brasserie, still not a single drop of alcohol had passed my lips.  Like the classic virgin bride, I was saving myself.  Good things come to those who wait. 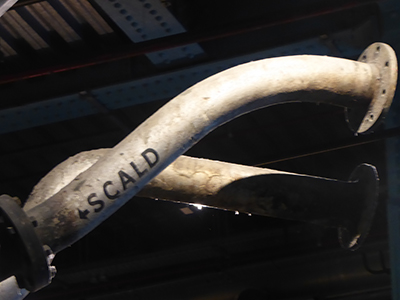 The Gravity Bar occupies the 7th––and top––floor of the Guinness Storehouse.  From its 360-degree windows, there are fantastic views of Dublin in all directions.  And the place is heaving.  Whereas in the rest of the exhibition, although it remains busy, the crowds are never really oppressive.  Here, though, it is a proper, packed, Dublin bar, requiring both elbows and blarney to obtain both a drink, and a place to stand with an uninterrupted view.

By golly, though, it is worth it.  Whether it is the water originating from the Wicklow Mountains; whether it is that notorious Dublin poetic again; but the pint of Guinness that I sank in the Gravity Bar at the top of the Guinness Storehouse was the best I had ever had.

Travel writer E. C. Glendenny has never been afraid of the dark.