The Understated Dignity of a Railway Porter

It’s not often you find a railway porter these days.  When I was younger they were a common sight, but now they are an increasingly rare breed.  This seemingly random descent into nostalgia is not without a liquid catalyst.  A dark pint of Five Points Brewing Company’s Railway Porter sits on the table in front of me.

Railway Porter is a traditional London Porter, 4.8%ABV.  It comes with a reassuringly frothy head, like spume on a windy, North Sea beach, and a powerful, bitter caramel flavour.  Despite its dark air of forbidding, it is easily quaffable and has an understated dignity.  Which is a convenient segue back into my original reminiscence.

He was dressed in a Prohibition era-style uniform, which strained to cover a suitcase-sized midriff.  He talked with a deep New England Irish accent, and he looked too old to still be capable of gainful employment.  The scene was Boston South Station.  The hows and whys as to what I was doing there are another day’s story; suffice to say, I was simply waiting for the Amtrak train to take me to New York. 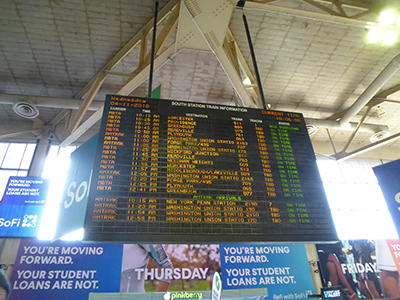 “Take your luggage for you?”

It seems like an innocent enough request but, in my head, there are alarm bells ringing.  All those stranger-danger warnings that are drilled into you as a kid sound large.  I refuse, demurely.

It is the ‘madam’ that gets me.  And the accent.  And the man’s age.  Surely no one past sixty can be a threat?

I let him take my luggage, which he loads onto a large, hand-pulled trolley-cart.  In exchange, I receive a small, hand-written chit.  He points to the station clock.

“You come back and find me here ten minutes before your departure and I’ll take you to your seat.”

And then he is gone.  Uniform, trolley, and my luggage, disappear I know not where, into the railway station depths.

My fears return.  Would I ever see my bags again?  Had I just handed over all my worldly goods to an elderly conman with nothing to show for them but a worthless scrap of paper?  In comparison, it made Jack of Beanstalk fame’s deal on the way to market seem a piece of astute business acumen.  I have simply exchanged the stress of looking after my own luggage for the stress of wondering where my luggage has gone.

I should not have worried.  Ten minutes before my train was due to depart, uniform, trolley, and my luggage reappear, accompanied by the midriff, accent and the understated dignity of their elderly owner.

I follow in my guide’s slow-moving wake; acolyte of the railway porter.

Beery Sue is not immune to a spot of old-fashioned courtesy.