The Joy of Reading Rarities

I have already stated my appreciation of the works of John Creasey.  Although not so many of his––hundreds of––books remain in print today, over the years most have been repeatedly reprinted in various, easily-available, paperback versions, such that there is little difficulty––time excepted––in reading the larger part of his oeuvre.

However, there are a few exceptions; a few elusive titles, which were published in their original editions––some 75+ years ago now––and never subsequently reprinted.  I have been pleased to come across several such titles only recently: The Dawn of Darkness, first published by John Long in 1949; Foul Play Suspected, written under his Michael Halliday pseudonym, and first published by Stanley Paul in 1942; and By Persons Unknown, written under his Jeremy York pseudonym and published by Geoffrey Bles in 1941.

The Dawn of Darkness is a true oddity.  It is a novel in Creasey’s Dr. Palfrey series, and yet it gets no mention in the recently reissued House of Stratus series on Kindle.  It’s subject matter––as well as its scarcity––may have something to do with this.  I won’t go into details, but the book’s theme perhaps does not resonate so widely with 21st century sensibilities as it might have done when it was first published, even allowing for Creasey’s apparent good intentions. 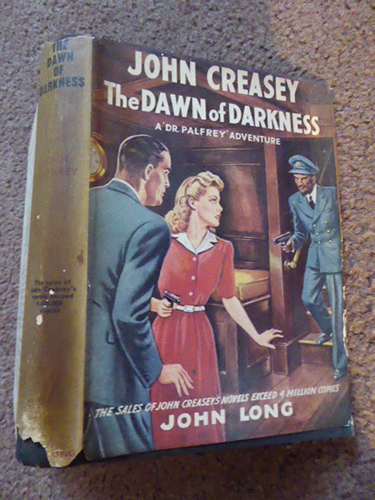 Foul Play Suspected and By Persons Unknown are both more comfortable reads.  Both are more straightforward crime thrillers, the first involving the disappearance of a young woman, the second a murder in a large house, and both have solutions that evoke the wartime period during which they were written. 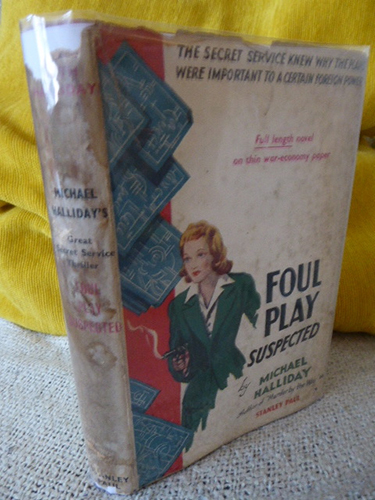 The Dawn of Darkness and Foul Play Suspected have terrific, evocative dustwrapper designs, whilst the wrapper for By Persons Unknown is a photographic representation of a scene from the book, and typical of Bles’ style at the time.  Being able to see these original wrappers only adds to the enjoyment of reading these scarce editions.