You are unlikely to travel all the way to the island of Düne––40 miles out into the North Sea from Cuxhaven––purely to go swimming but, once you’re there, it is a great location for a spot of sea bathing.

Düne forms part of the Heligoland archipelago, but whereas Heligoland is tall and rocky, Düne is flat and sandy.  Düne is Hardy to Heligoland’s Laurel. 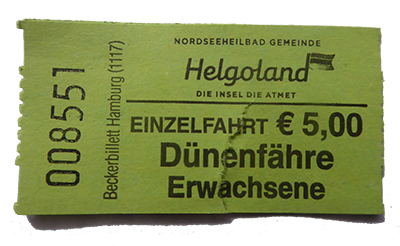 The boat trip between the two islands takes ten minutes, departs every half hour, and costs €10 return.  Düne boasts few amenities, although there is a small café/shop for those who haven’t come prepared with a packed lunch.  The island has a circumference of roughly 2.5 miles, and can be circumnavigated in an hour.

There are three main beach areas on Düne, although the beach to the east side of the island is stony and bathing there is forbidden.  Which leaves a simple choice between the Nordstrand and the Südstrand. 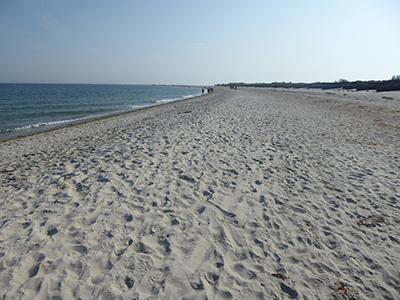 To swim from the Nordstrand I must share the waters with a blubber––is that an official collective noun (Ed.)?––of German naturists; whilst swimming from the Südstrand involves sharing the surf with a large colony of grey and harbour seals.  Naturists or nature?  I like to think of myself as broadminded as the next person but, when it comes to aesthetic aquatic appeal, the seals win hand down every time. 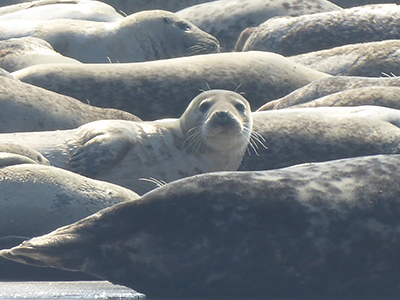 The Südstrand has a small, semi-private changing area, but I forgo its lack of romance; instead falling back on the time-honoured method of slipping into my swimming costume beneath the improvised privacy of a large beach towel.

Familiar to many North Sea and Baltic beaches, the Südstrand of Düne is liberally sprinkled with the peculiarly German, colourful wicker hybrid of the deck chair, wind break and the beach hut.  If these seaside constructions have an official name, I do not know what it is.  (I think you’ll find it is a strandkorb or strandkörbe (Ed.))

The water is cool, but it is not cold, although it maintains a grey North Sea austerity.

I am surprised by how quickly the beach shelves away; within only a few paces of the shore I am out of my depth.

I swim several ‘lengths’, parallel to the beach; flip over and lay on my back, enjoying the gentle swell of the waves flooding across my body.

It is in this same position, facing out to sea, the wide, empty expanse of the North Sea before me, that I spot seven heads pass across my horizon.  Seven seals swimming past, heads raised above the water, faces turned, curious, towards me.

I watch their leisurely passage, enthralled, before flipping onto my front and swimming back to shore, mindful of the notice I had earlier spotted. 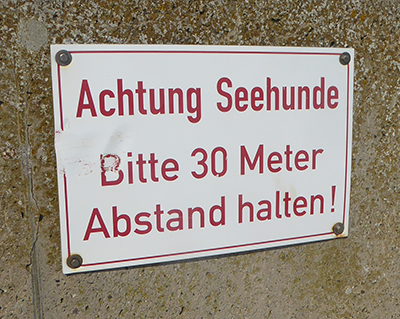 E. C. Glendenny is pleased that the FKK and seals can share the same beach space.