Almost every year, around about this time, one or other of the national daily newspapers runs a shouty-headline piece about the perils of wearing flip flops and the associated cost to the NHS of flip flop-related injuries.  Readings of these articles would suggest that flip flops are a bigger health and safety hazard than a bucket-load of depleted uranium and represent a greater drain on NHS resources than all the overpaid trust managers and ransomware cyber-attacks combined.

Well, after one day spent in Collioure, and I think that I might agree.

The first person tripped right in front of me on the pavement.  The second person I saw stumble, while I was watching through the window of the pâtisserie where my chocolate éclair lunch-order was being carefully boxed.  The third person was on the other side of the road from me; the fourth fell and had to be supported by his mocking companions.  And what did these clumsy pedestrians all have in common?  They were all wearing flip flops.

I started noticing people with bandaged feet; people hobbling on crutches.  Old flip flop injuries?  I’ll leave you to decide.  I wouldn’t want it said that I am the first to cast aspersions.  All I will say is that I prefer my trusty walking boots.  Come rain or shine they have consistently seen me set fair.

That summer in Collioure was hot; unusually hot, even for the region.  Every evening, the TV news was aflame with reports of forest fires raging on the border with Spain, not fifteen miles away.  It became a regular––and fascinating––sight to witness emergency fire-fighting aircraft skilfully swooping low to collect seawater from the bay, then flying up and over the hills surrounding the town to deposit their load on the fires blazing at the border. 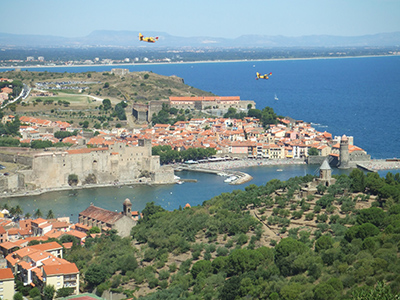 One day, I decided to walk up from the shimmering seaside town up past Fort Saint-Elme, to the Moulin de la Cortina, high in the hills, overlooking the sea.  The ground was parched brown and stony.  I was pleased to be wearing my walking boots; ideal footwear for the scorched earth.  I trekked higher, through groves of olives and almonds, their silver sparkle like a reflection off the distant crests of the blue Mediterranean wave-tops.  From a viewpoint, I could see the fire-fighting planes in the bay; saw them fly low directly above me on the way to Spain. 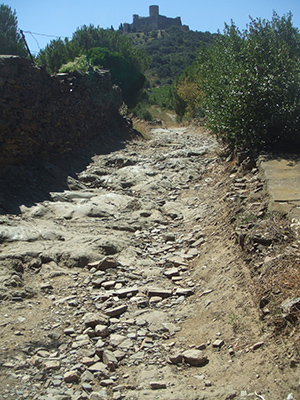 The heat was intense.  I stopped to drink some water; removed my sunhat; wiped sweat from my forehead.  The windmill was still ahead of me; I could see the top of its sails rising above the olive trees.  Below, a figure was approaching; gaining on me; walking purposefully; making light of the scorching sun and the harsh terrain of brown earth and brittle dry vegetation.  With one determined stride after another I was being overtaken; being beaten to the summit.

I could have raced, but I did not attempt to compete.

Let Flip Flop Man have his victory.  His day in A&E will not be far behind.