The Secret Tunnels Beneath Euston Station

The fragment of poster advertising Hitchcock’s Psycho provides a good indicator of how long the tunnel has been shut up.  Another poster is promoting West Side Story.  It’s been a while.

I had taken a Hidden London tour of the Euston tunnels not so much because I am a train enthusiast––although, judging by the knowledgeable questions, it was clear that plenty of my fellow subterranean explorers were––but more because I like tunnels and secret places.  Perhaps it is a throwback to my Mudskipper ancestry?  However, unlike my Mudskipper kin who, unaccountably ambitious, strove to rise themselves from the dark ocean depths in order to reach out towards the sunny heavens, I would have been quite content to have remained behind in the murk. 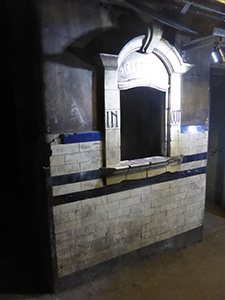 There was quite a lot of talk of defunct underground railways lines––my railway-enthusiast companions appeared satisfactorily sated––while I was just champing at the bit to get underground and grubby.  The ritualistic donning of a bright yellow high-visibility jacket held both the promise of adventure and also the reassurance of sufficient health and safety observations that I was likely to return unscathed.  No hard hat?  Get real: this is London after all, not Gaping Gill.

Our journey started in a red-tiled, disused Leslie Green designed station on the corner of Drummond and Melton Street.  It continued behind an off-limits––off-limits rather than hidden––door at the end of one of Euston’s busy Northern Line platforms.  Nevertheless, there was something Harry Potterish about being allowed beyond a wall of the station where ordinary mortals were not permitted to tread.  I felt like I’d been given a backstage pass at Glastonbury, except instead of rubbing shoulders with Thom Yorke and Katy Perry, I was transported back in time to a world, which existed before my birth: a familiar world, but an unchanged world.

We were now off the conventional tube map.  Here be tunnels, if not dragons.

The commentary of the tour continued.  Our guide was very knowledgeable and very enthusiastic but, if I am being honest he could have been talking in Swahili.  Similarly, I had no great interest in the educationally informative panels, which were liberally displayed amongst the tunnels.  I just wanted to be left alone to run free in this subterranean labyrinth.  I would have poked my snout into every dusty passage; pried into every grubby, forgotten recess.

Of course, I did nothing of the sort.  I remained dutifully with the tour; nodded my head respectfully to show that I was listening when it was expected of me; followed in the footsteps of my companions.  The truth is I like my urban exploration both controlled and prescriptive.  So I did not leave this secret underground space disappointed.  I have always been fascinated by the excavated world, which runs beneath London––the network of buried passageways, which is every bit as complicated as the grid of roads on the surface––and it was thrilling to be given the opportunity to venture into one small part of it.

Here’s a tip: sign up for the London Transport Museum e-newsletter before 10 July and you qualify for priority booking.