Fishy Totems in the Lofotens

Viewed in isolation, it would be hard to guess what kind of creature the head had once belonged to.  Stripped of its flesh and desiccated, it has some features that resemble an unfortunate dog; others that look vaguely reptilian.  In this remote corner of the world, it would be easy to believe that there exist fantastical beasts, unbeknownst to Man, of which this is a particularly monstrous aberration.

The reality is much more mundane: it’s a cod.

During the winter months, the Lofoten and Vesterålen islands of northern Norway are the scene of a flourishing cod-fishing industry.  The cool Arctic spring provides the ideal conditions for the cod to be hung out to dry on traditional wooden racks, known as hjell, after which it is matured in indoor storerooms, until the resulting stockfish is ready for export; the largest buyer being Italy. 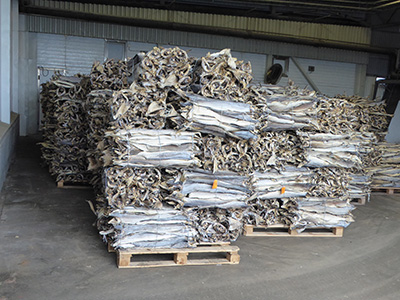 In the summer, the hjell stand empty; row after row of huge wooden frames, stark and severe, like something out of a mythical Norse giant’s prize cucumber allotment.  The stockfish has long since been removed to its warehouses; the enormous container lorries, which wait patiently at the quayside for the next off-island ferry, a testament to the thriving trade. 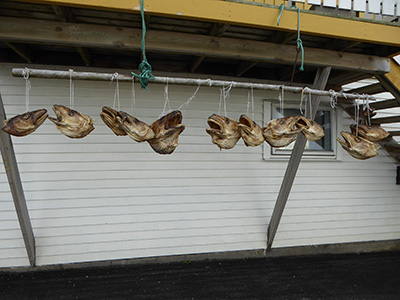 All that remains of the cod are their heads.  Discarded remnants; of no commercial value; not even of any great nutritional benefit to the ever-present cawing and circling seabirds.  Cod’s heads, which bestrew the ground beneath the hjell; are piled up in funeral pyre-like stacks in the long grass; are displayed on lines outside domestic houses, like totems to an omnipotent fish-god.