An Invasion Happening Somewhere Near You

He has been called the French Banksy, although probably only in the UK.  In France, Banksy is most probably referred to as the English Invader.  Despite their very disparate visual styles, there exist two obvious points of comparison between the two artists: both are chiefly famous for operating illegally in public, urban spaces, as opposed to commercial galleries; and both––successfully––conceal their identity.

Invader’s artworks started popping up in Paris in the 1990s, and subsequent ‘invasions’ have spread to cities worldwide.

Invader’s medium is coloured tiles, out of which he creates mosaics, which invoke the pixelated world of the computer monitor.  An early source of inspiration was the 8-bit video games of the early home-computer era, such as Space Invaders and Pac-Man, but Invader’s artworks have moved beyond their naïve origins.  Nevertheless, Invader’s interventions into world cities still take the form of a wider game: the world map as the canvas; the number of successful incursions into a particular city representing the number of points achieved within a particular round of the game.

It is a clever philosophy.  While we may all be pawns in an unseen god’s larger video game, Invader is managing to subvert this scenario by very successfully playing a subsidiary game by his own rules.

For ourselves, we have always enjoyed taking a quiet moment to stand and admire Invader’s Daffy Duck in Rue Lacépède, whenever we stay close to the busy Place de la Contrescarpe and Rue Mouffetard in the 5th arrondissement. 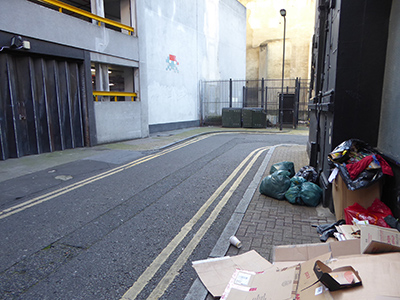 However, there are examples of Invader’s artworks closer to home.  West Central Street off Drury Lane is about as insalubrious an alley as it is possible to find in central London, and yet it is the venue for a piece of Invader’s art, and it is this artwork from which we have drawn our own inspiration.

However, being a little too aesthete to engage in what is, at heart, a tradesman’s pursuit of tiling, and not wishing to sully our hands with anything that might be considered so base as ‘real work’, we have chosen to do our own tribute to Invader’s work by reverting to the computer and the pixel.