Subterranean Surprises at the London Mithraeum

Bloomberg have returned and restored the Roman temple to the site of its original location, in the heart of the City of London, and have made it accessible to the public, located in a space beneath their European headquarters.

I had very few preconceptions regarding my visit.  After all, it’s not as though I’d visited any other Mithraeums before; I wasn’t going to be comparing the London one with anything else in my experience, either positively or negatively.  I knew that pre-booking was required (visitors limited to 30 for every half-hour slot); I knew that it was free (woo-hoo!); and I knew that the nearest underground station was Bank (slightly out of my usual London comfort zone).

Despite knowing the address––12 Walbrook, EC4N 8AA––I walked right past the entrance at the first time of passing; my attention distracted by the Walbrook Club, which stands almost directly opposite, a conspicuously diminutive old-skool survivor amidst a modern world of glass and giants.

However, back on track, the entrance lobby of the London Mithraeum is a masterclass of modern corporate hospitality.  I received a thoroughly professional scrutiny by a BYT (Bloomberg Young Thing) along with a sumptuous brochure; was escorted towards a bright and spacious interior, containing a colourful wall mural and a modernist sculpture.  So far, so City; not very Mithraeum.

The BYT handed me a tablet (21st century tech., not 3rd century relic).  I was impressed by the implied trust.  My mind was still in City mode: this must be at least £400 worth of kit I was being presented with.  I could break it; I could run off with it.  Would anyone try to stop me?  The BYT directed me towards a wall of olde objets, skilfully displayed behind a protective, transparent screen.  She pointed to the tablet, where a digital representation of the same wall of objects was displayed.

“Just touch an object on the screen to find out about its history.”

Neat.  It was a slick advancement on museum labels.

A battered old sandal caught my attention.  I located it on-screen; read its history.

“This is just a few hundred of over 14,000 artefacts discovered during the excavations,” said the BYT.

I did not break/steal the tablet; instead, I handed it back to the BYT, with thanks, as I descended a staircase and entered the next room of the Mithraeum.  What to expect?  I still didn’t know.

I found myself in a large, darkened chamber, part-exhibition, part-cinema.  A film, voiced by Joanna Lumley––nice––was the backdrop to one wall.  A display cabinet containing a highly illuminated white bust––not Joanna Lumley’s––drew me forward.  Mithras.  Here was a sculpture of Mithras.  He looked rather a good-looking fellow; quite benign; hardly a slayer of bulls. 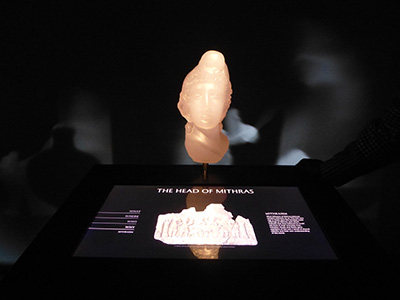 Was there more?  I wasn’t sure.  In fact, the best was still to come.  In one corner of the room, I noticed people disappearing along a further corridor; descending down a lower staircase.  There was something mysterious, almost furtive about their departure; it was possible to imagine that they might be slipping away to attend a secret rite.  I joined their number and followed the procession.

I was directed into a dark room, my eyes struggling to adjust to the low light.  I was aware of a low murmur of voices.  Was it my imagination, or was a thin mist beginning to descend?  It was certainly no imagination that the voices were becoming louder; that their words were becoming discernible as rhythmic chants.  It was both atmospheric and slightly unnerving.  Despite rationally knowing that I was only 7 metres distance––measured directly up––from the heart of 21st century corporate London, I felt as though I had been transported back through the centuries to Roman times.  I would not have been surprised to see any kind of pagan practice take place before me: Bacchanalian feast; naked virgins; ritualistic slaughter.

The shadowy, ethereal outline of pillars started to appear out of the mist; low lights began to illuminate a long, rectangular space; the outline of old, stone walls; a futuristic altar.

It was all very well done.  I doff my cap to Bloomberg.  Or whatever the Roman equivalent would have been.  Tip my galea, perhaps?  Through a combination of City millions; patient archaeological reconstruction; and theatrical artistry, they have succeeded in bringing a little taste of Mithras back to central London.

Whether you be a follower of the Cult of Mithras, or not, I thoroughly recommend a visit.

E. C. Glendenny is always happy to get back to her inner-pagan.