A Pint of Scarlet Macaw in the Hand

Oakham Ale’s Scarlet Macaw is a 4.4% ABV American pale cask ale.  A good amber colour; substantial white head; and an appetisingly fruity taste.  It is the kind of pint where you can feel confident that you are in safe hands.  A good pint for sinking slowly and indulging in a spot of yesteryear reminiscence. 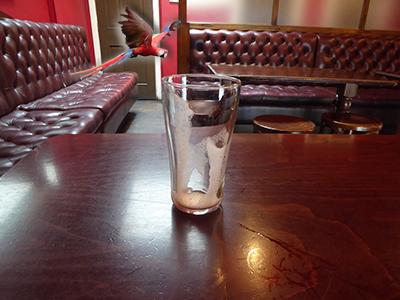 There was a time, when I was younger, when it was quite common for people to keep birds.  One old aunt of mine had a budgie in her Hatfield tower block, which always refused to look at me; no matter how swiftly my juvenile self circuited the budgie’s cage, the little blue bird was always one step ahead of me, steadfastly presenting a stoic back.  It wasn’t just me who was scorned; the budgie was similarly anti-social with everyone, old aunt as well.  It was hardly the most edifying companion.

Another elderly relative kept a parrot in Holloway.  It wasn’t a Scarlet Macaw; it wasn’t anything like so brilliant. In fact, my memory of the bird is that it was a rather dull creature; dull plumage; dull surroundings; dull intellect––it was never once persuaded to talk, despite numerous attempts at persuasion with oft-repeated simple phrases.  But that was what it was like, the past: a dull place where everyone kept birds.

Nowadays, no one keeps birds: no one save Levantine lodgers in Charlton and wealthy Americans in Ealing.  It may seem like a generalisation, but trust me, I know.

Beery Sue doesn’t keep a bird in either her hand or her bush.