The headline “Drink Free” was guaranteed to get my attention.  Where was this utopia where I could drink for free?  I knew of a free wine fountain at the Monastery of Irache on the Camino route to Santiago; similarly, on another pilgrim route in Italy, there is free wine available at the Dora Sarchese vineyard in Caldari di Ortona; and, back in the Days of When, complimentary bottles of––perfectly decent––plonk used to stand on restaurants tables in Spain alongside the condiments, but I couldn’t recall a similarly enlightened free drinks culture existing anywhere in England.  And, of course, there is not one now.

The campaign also focuses on the health benefits of having a day without drinking.  In a useful infographic it illustrates that the calories contained in one pint of lager are roughly equivalent to those in a quarter of a large pizza. 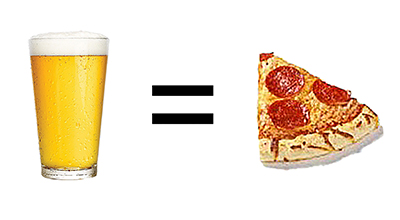 By my reckoning, this means that I could have a Pizza Free Day, drink three extra pints of lager, and still stand shoulder to shoulder with the virtuous.

Beery Sue unexpectedly finds herself on the side of the angels.