There is an old joke about a film star who is so hungry for publicity that he would happily turn up at an event as insignificant as the opening of a letter.  I haven’t thought about the joke for decades, but it runs through my head again as I stand on the corner of Bedford Square and Gower Street waiting to attend the unveiling of a commemorative letter-box to celebrate the work of the poet Andrew Motion. 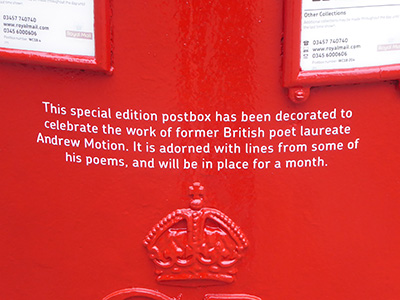 The post-box has lines of Motion’s poetry emblazoned on its red flanks and its location is supposed to correspond to the poet’s favourite spot in London.  However, not such a favourite spot that the man himself is actually in attendance here today.  Instead, some of his poetry is read aloud by Young People’s Laureate Momtaza Mehri. 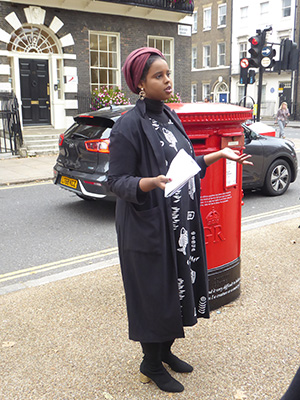 It is an intimate audience of onlookers who gather to hear the recital; for ‘intimate’ read ‘small’ if you deduct the youthful and enthusiastic ranks of the assembled National Poetry Day PR team.  Perhaps the size of the audience had been anticipated?  National Poetry Day badges are distributed to the ‘crowd’ at the end of the performance.

There are only five badges.

I do not get one.

Fergus Longfellow does not feel slighted on National Poetry Day