I have owned the same pair of walking boots for almost 20 years.  They were not a particularly expensive pair of boots; in fact, “cheap” may well have been one of my primary requirements when the shop assistant asked me what kind of boots I was looking for.  In a world of boots, it is a quantifying term guaranteed to narrow the range of choice as efficiently as any other.

So, cheap boots from Blacks Outdoor Leisure Store in Rathbone Place, just north of Oxford Street.  The store no longer exists in the same location, replaced instead by a camera shop.  My boots have had a greater longevity than the shop I originally bought them from. 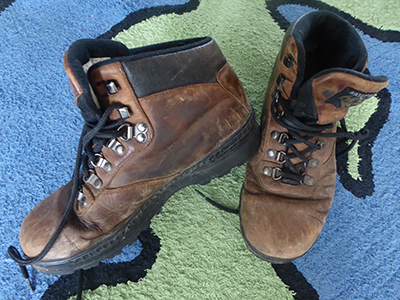 At the time, I needed boots to join up with a friend’s invitation to walk the Bangor Trail, an old drover’s path in the Nephin Beg mountains in County Mayo, Ireland.  The plan was to walk from Bangor Erris to Newport, covering 26 miles in one day, across one of the most remote corners of Western Europe.

I accepted the invitation before I bought the boots; began the actual walk before I had properly broken in the boots, but I needn’t have had reason for concern: the boots proved perfectly comfortable; waterproof; able to meet the twin demands of hillside slopes and low bog-country.

Since that first walk, my boots have been a regular companion: they have seen me into the Grand Canyon and back; across Rannoch Moor in the snow; along the Dragon’s Backbone and beyond.  Where I went, they went.  Where I walked, they walked.  Over all the years and all the destinations, they have never failed me.

So, it was with a feeling of genuine sadness that I came to put them on recently––purely for a short walk in my local park––to find the right boot separating, the top from the sole.  It had simply reached the end of its time.  Like an old dog, unable to stir from its basket for one last caper, my boots could walk no further.  I knew it and they knew it.  I could, perhaps, have effected a temporary repair, but it would only be delaying the inevitable.  It was the moment to call time on my old boots. 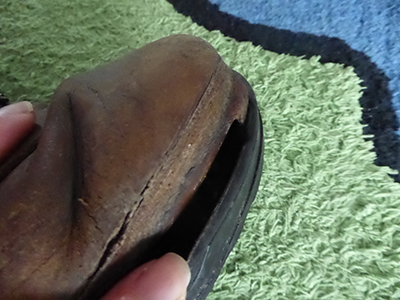 I am going to miss them.  I know when a sufficient period of mourning has elapsed that I will buy myself a new pair; rationally, I can recognise that modern boots will be more lightweight and less cumbersome than my old boots whilst remaining just as durable; but, nevertheless, a void will remain.

A void waiting to be filled up with new walking memories.

If you enjoyed E. C. Glendenny’s homage to her boots, you may like Simon Turner-Tree’s A Day In My Shoes.